The environmental effects of global warming continue to dominate as an increasingly serious worldwide concern. However, just as the frightening statistics reveal the true impact of climate change, it’s reassuring to know there are countries adopting sustainable ways of contributing to a low carbon future, to help slow down the devastating effects of global warming.

If YOU were to guess which country produces the most renewable energy, would you guess correctly?

Well, here at eCo2 Greetings, we’ve created an interactive map featuring the 131 countries who are indeed producing the most renewable energy and contributing towards a greener, more sustainable planet.

Which Country Produces The Most Renewable Energy? 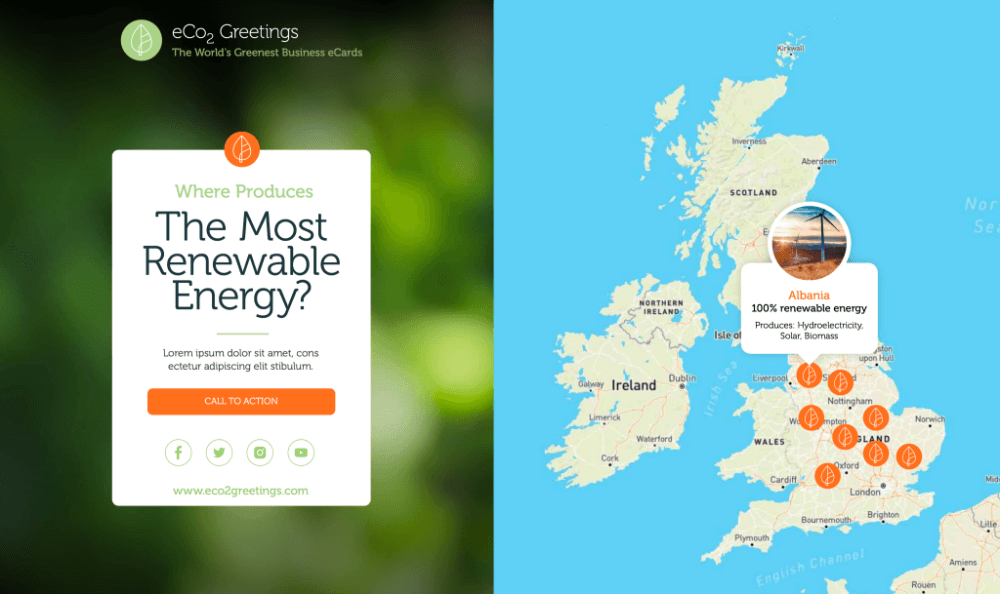 Full data in this document.

Our map highlights the countries that are truly leading the way in sustainable energy by embracing and utilising natural resources such as solar power, hydropower, wind power and geothermal energy.

What is the most popular method of renewable energy production around the world?

Our research has revealed that hydropower is the most popular green energy method with a staggering 90% of the countries listed using water to produce renewable energy.

And unsurprisingly, due to the lofty costs associated with operating a geothermal power plant, geothermal energy is the least popular renewable energy source, with only 22 out of the 131 countries using this method.

So, which country produces the most renewable energy?

Did you know that Albania is almost completely dependent on hydropower for electricity generation? Yes, that’s right Albania actually produces a grand total of 7783.9 gigawatt hours (a unit of power equal to one billion!) of renewable energy. And it’s mostly generated through hydropower all thanks to the 8 main rivers that flow through the country!

We’re guessing you’re interested to find out how much of the UK’S generated energy is renewable and which green source it is generated from? Find out by locating us and the other 130 countries on our interactive map!

As long as coal continues to dominate as a major source of electric generation, the effects of climate change are inevitable. However as the statistics have shown from our map, technological advancements have allowed countries to explore renewable energy as a sustainable alternative.

At eCo2 Greetings we are really invested in following the progress and innovation around renewable energy. And we’re trying to do our bit too. Here at eCo2 Greetings we provide the world’s greenest business eCards. Discover our range of business holiday eCards online now!

Time for more from Eco2 greetings?

Check out: The world’s most wasteful countries | The most endangered animals around the world